Eagles Round Up Regular Season With Home Win No.19

Newcastle Eagles/News/Eagles Round Up Regular Season With Home Win No.19 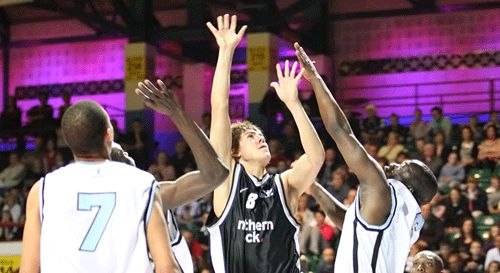 Newcastle Eagles continued their strong finish to the BBL Championship season as they ran out comfortable 77-64 victors over the PAWS London Capital at the Metro Radio Arena on Friday evening. The Eagles started strongly with a 10-3 burst but the visitors kept themselves in the game and only trailed by a single point at 19-18 at the end of the opening period. In the second quarter the Capital took the lead at 26-36 off the back of a 10- 3 burst and continued to lead throughout the remainder of the period to take a 36-40 advantage into the locker rooms at the half. In the second half the Eagles began to assert their authority on the game and a 15-5 burst to open the third quarter gave them the lead back at 51-45.

A further 7-0 Eagles burst to close out the third period gave the home side a 60-51 advantage heading into the final stanza. In the final period the Eagles controlled the remainder of the game and were able to secure the victory. Sam Attah led the scoring for the Eagles with 15 points, but it was Ibrahim Gariba who led all scorers in the game with 24 points for the Capital.