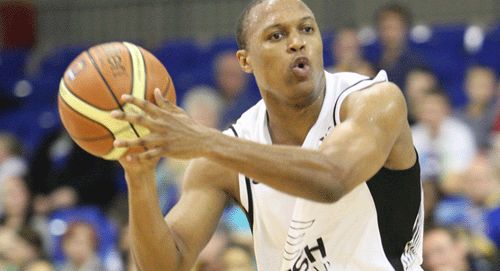 For the second time in a week, the One Health Sharks Sheffield overturned a first leg deficit to secure their place in the BBL Championship Play-off Final at the National Indoor Arena next Saturday thanks to a 98-78 victory on the night, resulting in a 166-154 win on aggregate over the Newcastle Eagles at the EIS, Sheffield on Sunday afternoon.

With the Eagles leading 68-76 after the first leg, they started the stronger with a 7-2 opening to the game. The remainder of the first quarter saw both teams trading baskets with the home side clipping into the Eagles lead, but the visitors held onto a slender one point lead at 25-26 at the end of the first period.

In the second quarter, an Olu Babalola basket gave the Sharks the lead at 33-31, but the Eagles were not to be outdone as they rattled off the next nine points of the contest to take the score out to 33-40. The Sharks were not to be blown away that easily as they fought straight back into the contest with a 7-0 burst of their own to tie the game up at 40-40, but the visitors maintained their advantage as the sides headed into the locker rooms with the Eagles leading 42-46 at the half.

In the second half a pair of Drew Lasker free-throws kept the Eagles ahead on the afternoon at 44-50, but five points from Babalola helped the home side enjoy a 12-4 burst to take the score out to 56-54 midway through the third quarter and a further 14-5 tear towards the end of the period saw the Sharks lead extended out to 11 points at 73-62, but a Reggie Jackson three-pointer saw the Sharks leading 73-65 and the teams tied on aggregate heading into the final stanza.

In the final period a Lasker basket trimmed the deficit to six points at 80-74 meaning the Eagles lead by two points on aggregate, but this was the last time that they would be in front as the Sharks broke the tie open thanks to a 15-1 tear, including seven points from Paul Williams, to take the score out to 95-75 with 2:07 remaining in the game.

The Eagles tried valiantly to get themselves back into the contest, but the Sharks proved too strong for their opponents as they secured their return to the NIA from the foul-line.

An impressive 32-point, 13 rebound performance from Babalola was the stand-out for the Sharks, while Jackson was the main man for the Eagles as he bagged a team-high 28 points for the Eagles.