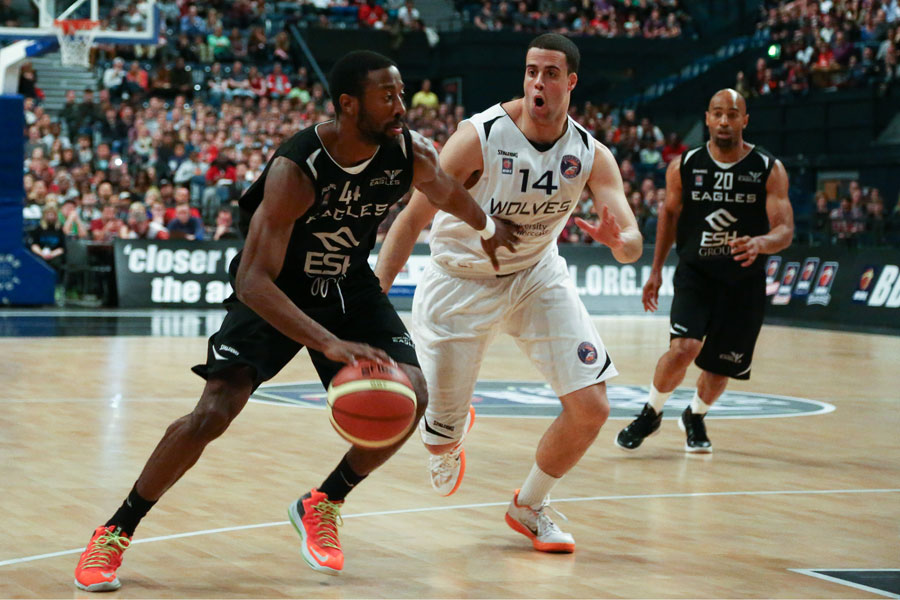 A decisive third quarter burst by the BBL Trophy holders gave them enough of a lead to hold off the league title winning Eagles in the final period. Zaire Taylor (pictured) added the final MVP award to his regular season one with a brilliant personal performance of 30 points, nine assists, six rebounds and four steals.
Darius Defoe led the Eagles scoring with 22 points while Taylor was supported in his efforts by 14 points each from Will Creekmore, Kalil Irving and Jamal Williams. An and-one from Darius Defoe was the perfect start for the Eagles as they quickly raced into a 6-2 lead on a Drew Lasker three.
However, a 5-0 Wolves burst gave them their first lead of the match and Paul James’ team went on to dominate the opening quarter. A Kai Williams three made it 13-10 and the lead was pushed out to 22-14 on two Zaire Taylor free throws.
Kalil Irving inflicted more punishment on Newcastle with a three and an outrageous basket by Taylor made it 27-14 as Wolves ended the first quarter 29-15 on top.
Eagles, as befits the champions of the regular season, fought back in the second quarter. A Defoe block seemed to inspire Newcastle as Scott Martin brought the match back to 33-23. Martin was enjoying good form at both ends of the court and he was a vital figure as Eagles cut the deficit to 37-33 with an 18-8 run.
Kai Williams stopped the rot for Wolves with a three but a Charles Smith dunk began another Eagles surge to make it a one point game at 41-40. Defoe replied to a Will Creekmore two to make it 43-42 but it would be Eagles last points of the half as Taylor’s buzzer-beating three pulled his team 48-42 clear at half time.
Newcastle got within two at 48-46 and seemed likely to take control with Creekmore picking up his third foul. But the Wolves responded superby to break the match open.
Alex Owumi’s three came early in a 17-0 run by Worcester but it was the fast break points from Taylor that did most damage as Wolves moved to 67-46 in front with 2.51 remaining in the period.
After a two by the Eagles, Taylor’s three made it 70-48 and despite Newcastle ending the quarter back within 20 at 72-52 there was little hope of a recovery.
Writing the Eagles off is a dangerous business, though. Especially with Charles Smith around. Paul Gause had already cut the gap to 16 before a long three by the same player made it 75-61.
Wolves regrouped and seemed to have stemmed the Eagles flow of points before two threes by Smith reduced the deficit to single digits at 82-73 with 4.27 to play. Taylor wasn’t to be denied though as he made it 84-73 to finally end Eagles fight back.