Eagles Are Up For The Cup

Newcastle Eagles/News/Eagles Are Up For The Cup 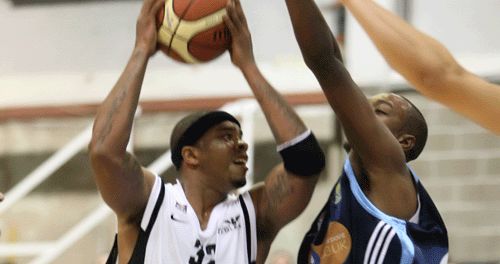 Newcastle Eagles and Worcester Wolves will be looking for a place in the BBL Cup semi-final when the two sides meet at Sport Central on Friday evening.

The two sides have already met in BBL Championship action in Worcester this season, with the Wolves taking the league points with a 99-96 victory, and Eagles forward Kadari Richard is hoping to take revenge: “It’s payback time for earlier in the season, and we’re trying to put together a nice of wins in all of the competitions. We want to get on a streak, we’ve had a bit of break and we’re hungry to get back on the court.”

Richard is looking forward to Friday’s match-up: “It’s on Sky TV so we’re really looking forward to putting our best foot forward. Being on Sky gives everyone the chance to see us play, and I’ve got friends and family back in Worthing who are excited to see me on TV.”

The American forward rates the Wolves side highly: “They have a nice core of players; [Watts] hit seven from ten three-pointers on us last time, and Dan Gilbert and Rod Middleton are also good players. They’re a class team who are well coached and play hard. They can knock down three pointers if you let them, but we owe them and we’re looking to get to another semi-final.”

Eagles coach Fab Flournoy has a good idea what his side has to do if they are progress to the last four of the Cup: “We have to defend better and rebound better. We gave up 52 first half points last time out and that simply won’t get the job done.

“Rod Middelton runs the team for them and [Dan] Gilbert and [Justin] Dobbins are solid scorers. DavidWatts is their X factor and we let him get away from us in the last game. We have to do a better job against him this time around.”

Eagles were without a game last weekend, and Flournoy was happy to have the break: “It was certainly a good thing for me as it has allowed me more time to rehab from the knee strain I picked up at Sheffield. I think our guys were probably thankful for the break given the intensity of the schedule we have had up to now but we will not know for sure until Friday when we step onto the court.”

Wolves coach Paul James is in no doubt how tough it will be his team to win in Newcastle: “The Eagles are as tough a team as they come. Fab does a great job in getting his players to understand and execute what it takes not only to win games but championships.

“Charles Smith, Trey Moore and Joe Chapman are playing great just now and if Darius Defoe brings his game too then you know its going to be a long night. The last time we played them we were able to put together a very good team performance and even though they came back at us strong to take the game to overtime, we kept our nerve to take a very good win.”

Wolves split their games last weekend, beating strugglers Essex Pirates at home before losing at UCP Marjon Plymouth Raiders, and James wants a big improvement from his side:

“Of late our performances have been very erratic and frustrating to say the least and we need to get back to where we were to give ourselves any chance in this game. As a coach you want to be involved in every competition so every game we play is very important.

“Against the Pirates we showed some of dragging ourselves out of the mini-slump we are in but the next day we were poor against Plymouth and credit it them they took full advantage.

“Danny Gilbert had a positive weekend and Justin Dobbins showed what he can do against Plymouth. Tin-Tin [David Watts] was not available for the weekend due to personal reasons and it is unlikely that he will be available this week which is a real blow for our team. However our thoughts are with him at this very difficult time.”