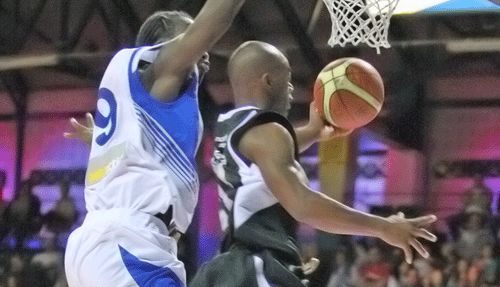 Needing a win to give themselves a realistic hope of keeping pace with the Eagles, Atiba Lyons team fought back from a 12-point third quarter deficit to stun the Geordies.

The Eagles were boosted with the return of both player-coach Fab Flournoy to the bench after a bout of pneumonia and point guard Reggie Jackson, who has been brought in for the injured Joe Chapman.

Sharks were hoping to keep Eagles close after been blown out during the first half in their last meeting. And at 5-8 to Sheffield it looked like the plan was working.

However, the returning Jackson’s first contribution of a three to make it 14-12 started a 12-0 run from the Eagles.

A three by Steve Dagostino to follow a two from former Newcastle favourite Olu Babalola brought Sheffield back to 23-17 at the first break.

Once Charles Smith had made it 25-19 the Sharks began to dominate. A Ryan Patton two and a brace of free throws from the same player bookended a 10-2 run, which gave Sheffield a 27-29 lead.

The visitors three times increased it to a four point advantage before five points from Smith, to make it nine for the quarter, restored the Eagles lead at 41-39. Marcus Stout (pictured) had the last word for Sharks to tie the game at 41-41 at half time.

Eagles seized control early in the third quarter. A superb 12-2 start to the second half saw them open up another double-digit lead at 53-41.

Sharks battled back to within two through seven points from Steve Dagostino, a two from Mike Tuck and a three by Patton but Eagles moved to 67-59 on two Trey Moore free throws.

Sheffield wouldn’t be denied though and they scored the third quarter’s last seven points to trail 67-66 at the final break. In a tense final quarter Smith and Trey Moore both scored threes to give Eagles a 76-72 lead. Sharks responded and went in front on a Stout three (76-77) and then again when Patton drained a triple (78-80).

Jackson levelled the score at 80-80 from the line as did Moore with an ‘and one’ at 90-90. From there it was Sharks who dominated. A 7-0 burst made it 90-97 and despite both Smith and Andrew Bridge making threes the Sharks kept their nerve from the free throw line through Dagostino, Babalola and Lyons to seal the crucial victory.

The victory came after a solid and energetic team performance but guard JR Blount (pictured) stole the show with a massive 40 points as the home team celebrated an important win as they look to move up the BBL Championship table.

The loss completed a miserable weekend for the Eagles with coach Fab Flournoy not travelling despite having made a speedy return from his recent illness the night before.

While Eagles may well have been feeling a little jaded after their pulsating game against Sharks on Friday, this took nothing away from Riders who were superb, especially in the second half.

While they almost snatched defeat from the jaws of victory, it was a deserved win for the home team who had built on their slender 51-50 half-time lead in a tight first half to edge themselves further ahead at 81-77 by the end of three periods.

With plenty of vocal backing from their home fans, it was at the start of the fourth when the home team really stepped on the gas and having seemingly blasted the game open with a double digit lead at 97-85.

The Eagles were on the ropes but as in the previous couple of games where they found their backs to the wall, they rallied in the closing stages and almost gave Rob Paternostro and his team an almighty fright with a 12-2 run to make it a one shot game inside the last minute.

Eagles did have their chance to complete another great fight back on the road but to their credit, after a major wobble the Riders clung on for victory as they raced away to seal the deal on the last play with Eagles defence AWOL after a dunk by Richard had brought it to within one point.

Charles Smith and Darius Defoe both claimed double-doubles for the visitors but it wasn’t enough with 40 points from Blount the stand-out contribution.