A Champion Night Out! 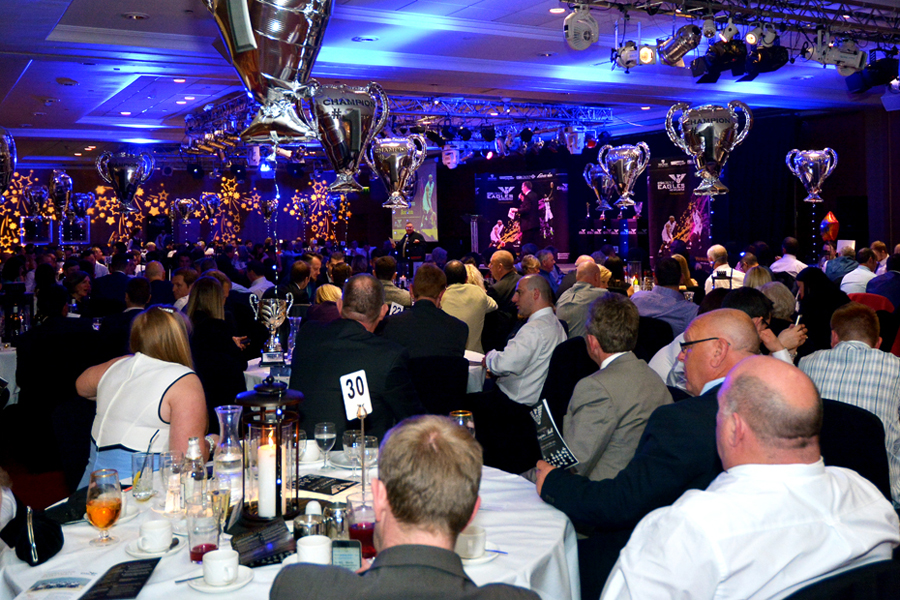 It was a star-studded glitzy glamorous celebratory night at The Gosforth Park Marriott Hotel on Monday when Esh Group Eagles Newcastle held their Annual Corporate Awards Dinner in splendid and classy style.

With The Eagles having just retained the BBL Championship Trophy the theme for the night was “The Champions’ Ball’ as the latest win made it an amazing 21 trophies in the past 10 years. An unprecedented achievement and who knows, there may be more on the way.

The event was hosted by the inimitable Dan ‘Mr Smooth’ Black who was ably assisted during the night especially as auctioneer and prize draw presenter, Howard Leighton. The double act kicked proceedings off by bringing The Team and full back room staff on to the stage to be applauded by all.

Drew ‘The Artful Dodger’ Lasker then got proceedings off to a flying start by hosting the opening fund-raising Clapping game backed by his team-mates on stage and a superb job he made of it too. One thinks he may have a future outside of the game.

As the night progressed there was great entertainment from The Beat Box Waiters and a splendid 3-course meal served by The Marriott staff which went down well with the attendees.

Then it was on to the awards. Special achievement awards were given to Howard Leighton and Jeff King for their services to The Club and Eagles Community Foundation. Then on the playing side Ladies Under-18 player Beth Wilson was honoured for winning the overall School of Excellence MVP for 2015, a proud moment for Women’s basketball.

Northumbria women had a great season in the hugely successful inaugural WBBL and their MVP was awarded to forward Fiona O’Dwyer. Next up it was Christian Hatch’s turn to take the MVP award for Northumbria’s men team who had a solid season in EBL Division 1 as well as becoming BUCS Champions for the first time ever.

The Esh Group Eagles Newcastle Wheelchair Basketball MVP was Ross McConnell which was in itself a lovely story as Ross had returned to the sport this year after retiring after his previous spell with the Club.

Then it was time for the main award of the evening, Esh Group Eagles Newcastle’s Player’s Player of the Year. The most prestigious award the Club gives out and a true testament of a players’ worth being chosen by his fellow professionals and team-mates.

Not surprisingly perhaps the award went to Charles Smith aka The Prince aka Charlie Buckets who at 39 years young shows no signs of wilting and like fine wine just seem to get better with age. In true ‘Chuck’ style he accepted the award in his own unabashed style.

A little jig, a bit of beat boxing of his own and a lovely song to honour his lovely wife Nicola as once again he brought the house down and the awards part of the evening to a superb ending.

Yes, there was still time for money to be raised for The Eagles Community Foundation and even a bit of dancing too as carriages were called and the lights went down on another Fabulous evening befitting of such a wonderful organisation, Club and team.

The dinner raised almost £10,000 for the Eagles Community Foundation, thanks to everyone that supported the event!