BBL Team Of The Week-Week 1 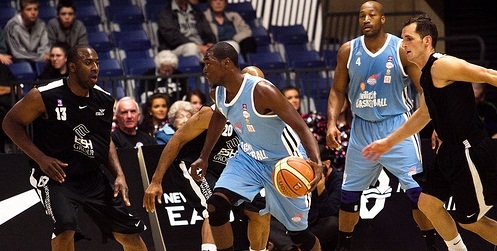 The very first BBL Team Of The Week for the 2012-13 season sees three familiar faces and two league rookies make the starting five.

BBL debutante Chavis Holmes certainly made an instant impression during his first taste of British Basketball League action. He helped his team destroy Mersey Tigers in brutal fashion. The playmaker showed Heat fans what they can expect this season with an excellent first night performance. He just missed out on a double-double after scoring 15 points and dishing up nine assists to torture the under-cooked Tigers. He also showed he is willing to do the dirty work too, pulling down six rebounds to complete a terrific performance.

Shooter James Jones may have moved club but he is no stranger to our BBL Team Of The Week having landed a place when at both Mersey Tigers and UCP Marjon Plymouth Raiders. Now, it has taken him only 40 minutes to accomplish the same feat with his new team, Manchester Giants, after a match winning role in the thrilling one-point home victory against London Lions. James was in typically deadly form from long-range, sinking five triples on his way to a mammoth 29 points. He was also excellent finishing inside the three-point line, going six of seven from two-point range while adding four rebounds, three assists and three steals to his line.

The all-action, energetic and bustling play of Sam Cricelli was very much in evidence at Surrey Sports Park as he made his debut for Heat, announcing his arrival with a typically buoyant display against a toothless Tigers team who just couldn’t keep pace with their opponent. One of the reasons for this was the instant form of the forward who landed a double-double of 21 points and 10 rebounds whilst also claiming four assists and three steals to help his team cruise to a landslide success.

It was a mixed weekend for the Rocks who crashed on opening night at Sport Central against the Eagles but then returned to the north-east 48 hours later to experience victory against Durham Wildcats at Newton Aycliffe. Pivotal to that first win of the new season was Gareth Murray who showed his impressive inside-outside skills. He finished with 20 points after going an impressive four of six from downtown where he had the hot hand but also converted three of five inside which made him a tricky customer for the Wildcats’ defence. The Scots forward also wrapped up a double-double by harvesting 11 rebounds in an excellent display.

Saving the best until last, centre John Fraley marked his first outing in British Basketball with the best performance of the opening weekend. Racking up a valuation score of 31 by torturing One Health Sharks Sheffield under the hoop, Fraley finished with a superb 10 of 13 inside on his way to 23 points, and was just as productive on the glass. He cleaned up with seven offensive rebounds giving him eleven in total. This secured a double-double, handed Riders their opening win of the season and also excited the clubs’ fans who can seemingly look forward to great things from their new big man this year.