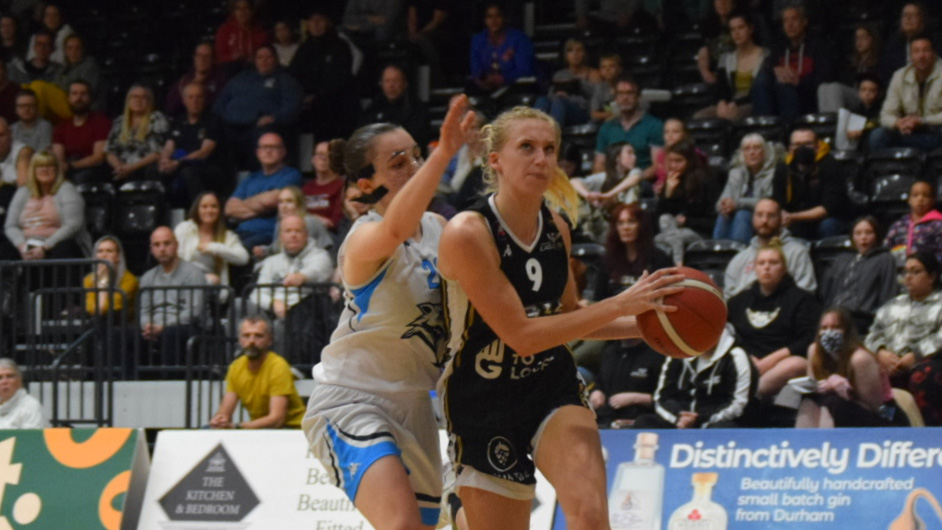 The undefeated Championship leaders bring their 8-0 record to Tyneside this weekend looking to take one step closer to another UK title.

But London may be forced to contend with a fired-up Lowe after the big game player penned a fresh deal with Newcastle who now face a race against time to gain clearance before tip-off.

“This is like home to me and I love everything about the Eagles as an organisation,” said the 24-year-old wing.

“I’ve really missed playing at the Vertu Motors Arena during the last 12 months and it was an easy move to make.

“Chloe [Gaynor] and Marina [Fernandez] are my friends and former room-mates and we’ve been in touch loads.

“I’m coming into a great situation with the team in a good position and I can’t wait to contribute from day one.”

Newcastle will need all the bodies they can get against a high flying London outfit as WBBL basketball takes centre stage for the second successive Saturday.

And Lowe will be thrust straight into the action after head coach Noelia Cacheiro persuaded the GB 3×3 star to kickstart her Eagles career.

“The conversation I had with coach Cacheiro about coming back went really well,” added Lowe.

“We know each other already but I knew the club had been prioritising a point guard for some time and so I wasn’t sure of the situation.

“In the end Noelia said she’d be really happy to have me here and that was all I needed to hear.

“It wasn’t really much of a conversation — I think it’s a good move for both of us!”

Lowe left Newcastle 12 months ago after looking to boost her minutes in the WBBL.

And the flamboyant scorer enjoyed a successful spell with the Eagles’ derby rivals Durham Palatinates as she closed out the 2021-22 campaign in the North East.

France-raised Lowe headed back across the Channel during the summer to hook up with Division Three side Anglet.

But visa complications left the former England Under 18 star out in the cold and looking for a new club after Christmas.

“It was a difficult situation in the end and it became clear that I wouldn’t be able to finish the season in France,” she explained.

“I came back to England hoping to sort out my visa but there was a hold-up at the Anglet end and I decided I needed a Plan B.

“I love my basketball and I just wanted to play somewhere where I could have some fun and contribute.

“Newcastle ticks all of the boxes and I’m thrilled to be back.

“Noelia’s done a great job turning the team’s fortunes around and we can approach the second half of the season with confidence.”

Club officials are hopeful of information Low will be able to take to the court tomorrow as they work around the clock to get the go-ahead from the governing body.

Saturday’s homecourt clash with the Lions follows hot on the heels of last weekend’s record-breaking Big One where Newcastle smashed the attendance record for a top-flight women’s game in the UK for the second season running.

Tickets for London’s hotly anticipated visit are still available from the box office.