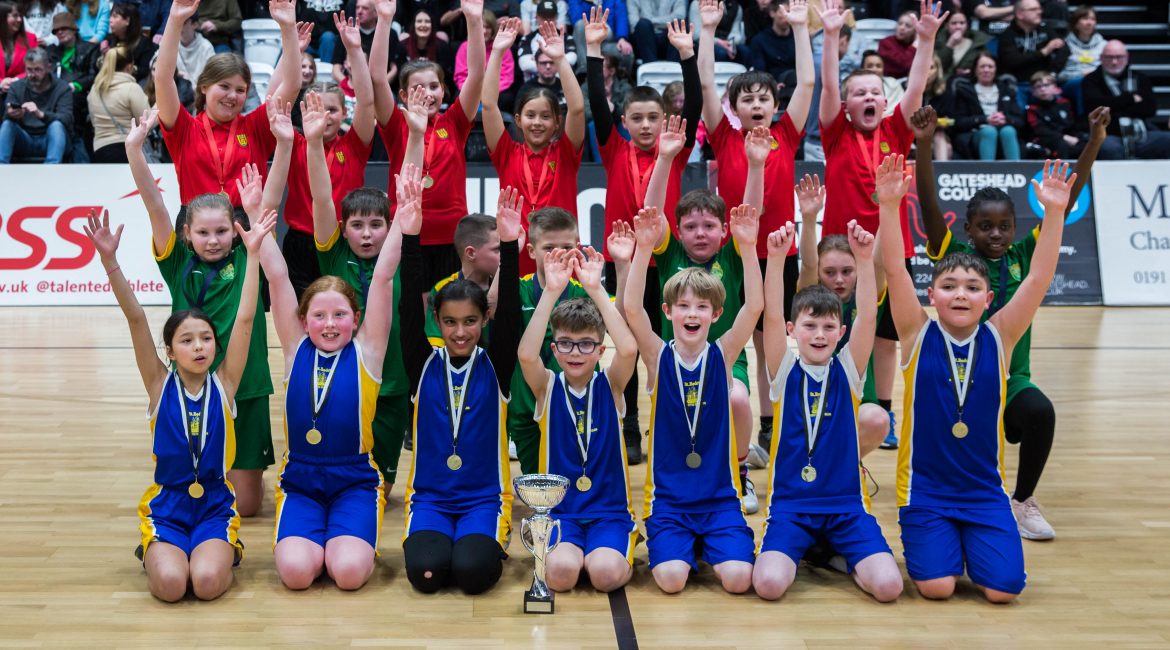 One of the most successful schools of the Hoops 4 Health era has hailed the groundbreaking community basketball programme that continues to impact positively on thousands of children across the North East.

“I’ve been involved with Hoops 4 Health from the start,” said Brian.

“I like the fact that it’s a mixed gender competition. When it comes to playing basketball at primary age the pupils have a similar starting point regardless of whether they’re boys or girls.

“If it was football, for instance, even at this age some of the boys would be so physically dominant that it just wouldn’t work. But in basketball the female players make a positive difference.

“Boys and girls can play together and play safely together. They also learn about healthy living and a sense of pride in their community.

“We can enter three or four teams each year and that means there’s a level for everyone.

“The Hoops4Health tournaments bring so many different schools and different communities together. They have a huge reach and have always been so inclusive.”

The South Tyneside tournament saw five schools — and 17 teams — from across the borough head north of the Tyne to compete at Newcastle’s Vertu Motors Arena.

And teams from St Bede’s, Stanhope Primary, Biddick Hall and Forest View made it through to the final fours to guarantee a return trip to the VMA on a Newcastle Eagles’ match night.

But for Brian, making the regional finals is just part of the story where Hoops 4 Health is concerned.

“We’ve had children at St Bede’s who started playing basketball through Hoops 4 Health and they’ve kept it up as a hobby throughout their school life,” he added.

“Others have joined local clubs and some have graduated into the Eagles Academy. It’s fantastic when you see a former pupil still playing the game 10 or 15 years later!

“When the Eagles players visit St Bedes our children are in awe of them. They really are.

“It carries far more weight as far as they’re concerned when a professional athlete advises them on how to eat well, live well and play together as a team.

“The Eagles players eat the right things, look after themselves and don’t smoke. And they get to do a job they love. They are genuine role models and have a significant impact on our pupils.

“When they hand out tickets and encourage the children to come along to the Vertu Motors Arena you can see the excitement in the pupils’ eyes — on a match night seeing really is believing.”

And St Bede’s took on Stanhope in what proved to be a tense final decided by a sudden death shoot-out.

“We’d narrowly beaten Stanhope in the round robin stages,” explained Brian. “But we expected a much tougher test in the final and so it proved.

“Their two-pointer against us in the final to take the lead was the first basket we conceded all tournament. But the team responded well and drew level.

“It became a really exciting game as both sides looked for the winning basket. But it went to sudden death and we won thanks to some really cool finishing.”

Hoops4Health engages thousands of school children across the North East every year and encourages them to eat healthily and live well.

And schools are encouraged to enter teams into the regional Hoops 4 Health mixed basketball tournaments with an overall Champion of Champions event taking place each year.

“The Eagles Community Foundation plays a key role at the heart of the North East community and what they have achieved with Hoops4Health underlines their excellent work,” added Brian.

“There’s a genuine connection between the foundation, the club, the players and the children they work alongside.

“After the last two years our pupils were just so pleased to be playing basketball again.

“Even to get to the point where we had four teams entered into this year’s tournament felt like significant progress.

“There was a real feelgood factor around school when everyone knew Hoops4Health was happening again.

“It felt like normality had returned and you could see children loving their sport again.”

Find out more about Hoops 4 Health on our website.