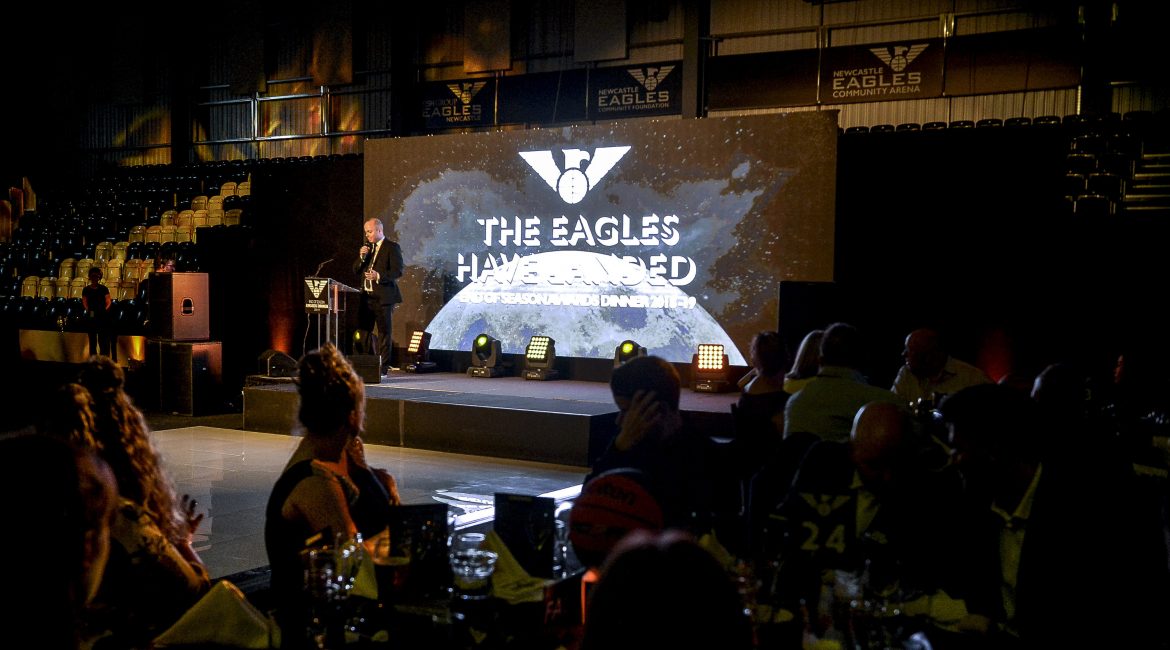 On Friday 24 May 2019 we hosted our first ever End of Season Awards Dinner at our new Eagles Community Arena and our first event of its size in our new home.

Just two years beforehand the club and foundation told everyone attending the organisation’s 21st birthday party that plans were in motion towards the building our own arena. This inaugural dinner was a huge night for celebration for the whole build project team, second only to the opening of the ECA also a Friday night right at the start of 2019.

Watch the video of an amazing night at our Eagles Community Arena:

Dan Black hosted the night, a familiar face to Eagles fans and our sponsors in very familiar surroundings, only this time with 30 tables seating 300 guests on a fully carpeted floor where our home games have been played since that first game on January 11th. Even the baskets had been put in place to set the scene.

While remaining recognisable as the home of Eagles BBL basketball the court had been transformed into a state of the art venue for an awards dinner and night of entertainment, including a 6m-wide video wall behind the stage and glossy-white dance-floor reflecting the high-tech lighting and sound equipment which had been brought in for the glitzy evening by the team at JC Events.

The evening began with a look back at that opening night and the learning curve the Eagles has been on both during the build and following the big move. After the Friday night game it was straight into a new ‘business as normal’ for the venue with Central Venue League the next morning, followed soon after by our Academy and WBBL teams moving in and many other events packing a schedule that has not stopped since.

Sam Blake, Eagles Community Foundation CEO, took to the stage telling her story of how the 12-year journey for the ECA project began and thanking everyone involved, from Eagles staff to the funders and partners in the build, and so many people who have been a part of the organisation along the way many of the people and many of the supporters of both the club and our foundation in the room.

The Lord Mayor of Newcastle Councillor David Cook, who was part of the council’s planning team for the project, told the audience how impressed he was with the final result after all the hard work that had gone into the ECA.

Paul Blake, Newcastle Eagles Managing Director and Chair of the Eagles Community Foundation’s board of trustees, took to the stage next to thank all the club’s sponsors and foundation’s supporters for this season and through the years that he has been working towards having a venue to call home for the first time in the organisation’s history.

Paul talked about what’s next, including lots of exciting developments coming for fans and hospitality guests in the first full season starting at ECA, after another busy summer break ahead – only without the need for hard-hats and high-vis this time.

There was lots of fun and games as always at an Eagles awards dinner with a very special game of Chuck-a-Duck, a true or false game and the players led a round of ‘The Clap Game’ usually found in the Hoops 4 Health roadshows in primary schools except this time played for bottles of champagne and raising much needed funds for the foundation to continue to grow programmes like that.

After a first-class dinner served by the fantastic team from Ramside Hall it was on to the 2018-19 End of Season Awards each presented on stage by our sponsors of the evening.

Academy Player of the Year

The evening ended with live entertainment on stage from the fantastic Glen Roughead, a packed dancefloor on the court and a busy bar in the foyer.

Many thanks to the team at Yardstick 36 for the event coordination, bar and catering management.