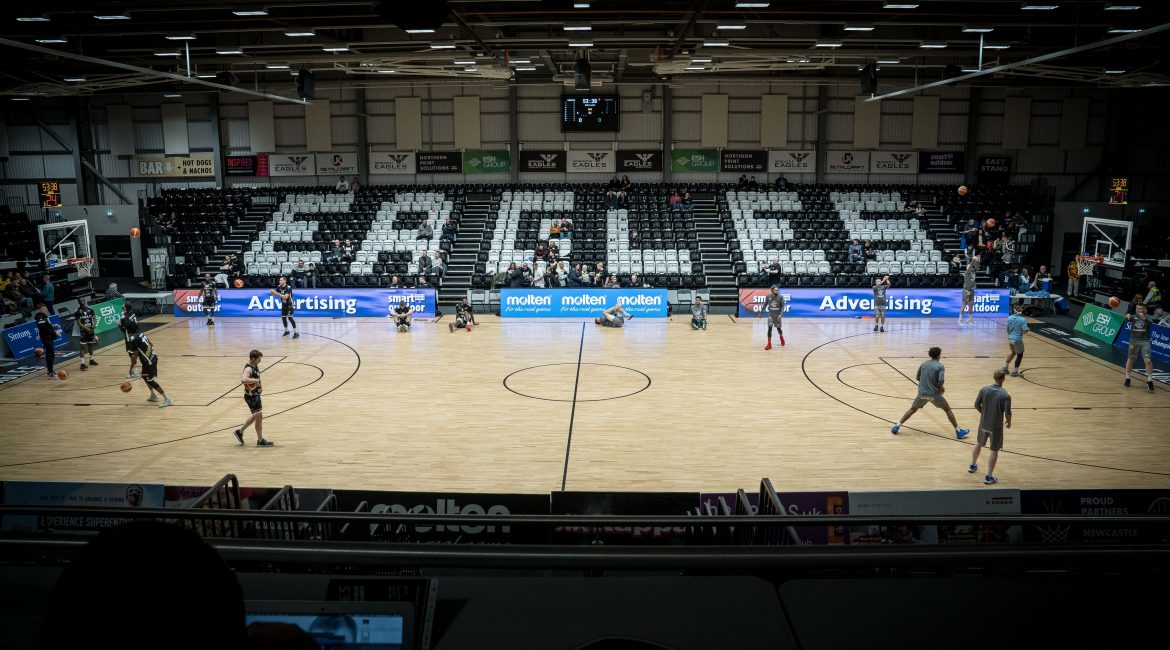 Paul Blake has pledged to deliver the safest environment possible as Newcastle Eagles prepare for the resumption of British basketball later this year.

BBL officials finally called time on the truncated 2019/20 campaign this week after initially calling a temporary halt to top-flight action in March.

And with hopes high for an autumn start to the new season, Blake is working towards repurposing the Eagles Community Arena (ECA) to fit the post-lockdown era.

“Right now we don’t know when we can resume playing, what the new normal might look like or even how many fans we will be able to accommodate given social distancing rules,” said Blake.

“But we can, at least, focus on the new season and plan for a future with basketball back on the agenda.

“The picture will become much clearer in the coming weeks and months but I can promise our supporters that our number one priority is creating an environment where everyone feels safe.

“That’s our focus from now on. I know that there will be people worried about watching live sport given everything that’s happened.

“I understand those concerns and that’s why we will do everything possible to make the ECA a safe, welcoming and positive environment.”

It seems increasingly likely that the Eagles will be asked to reduce the ECA’s 3,000 capacity – albeit temporarily – once BBL action does return to Tyneside.

And that capacity could be cut by as much as two thirds to accommodate a socially distant crowd.

But Blake is confident an autumn restart is possible and talks are already taking place with the club’s coaching staff regarding player recruitment and pre-season plans.

“We agree that it was the sensible decision to call time on the 2019/20 season,” added Blake.

“We are offering a variety of packages to ensure those loyal fans are not left disappointed, including credits for games in the new season.

“And I have to say a huge thank you to those fans who have already purchased their season tickets for the new campaign which could see as many as 27 BBL home tip-offs at the ECA.

“That income has proved invaluable to the club during a very challenging time and we truly appreciate the support.”

At a meeting last week, the BBL’s member clubs unanimously agreed that there was no viable option to allow for the season to be completed in a safe and meaningful manner after the campaign was originally postponed on March 17.

The league had been working alongside the basketball national governing bodies of Basketball England and Basketball Scotland and the British Basketball Federation, as well as following advice from FIBA and the UK Government to explore all the available options to resume play.

Following the cancellation of the season, and based on multiple teams mathematically capable of winning, the independent directors of the BBL Management Board agreed that there would be no winner of the championship title.

BBL Chairman Sir Rodney Walker said: “Obviously this is not the way anyone wanted to see the season end and we worked hard to try to find an alternative solution.

“The 2019/20 season was one of the most exciting and competitive we’ve seen and shaping up to a very exciting finish. We look forward to building on that as we move into the 2020/21 campaign.

“We looked at every option, including playing behind closed doors or restarting the season in the summer, in order to determine league and playoff winners.

“But with the continued uncertainty, we just ran out of time and options. The clubs were united that now was the right time to bring the current season to a close.”

British basketball fans will see more games played over the 2020/21 season as a change to the Championship competition sees teams face each other three times.

But the BBL are keeping open the exact starting date for the new season, pending further Government advice.

BBL Chief Operating Officer, Andy Webb, said: “We’re working towards starting in the autumn as we would be normally.

“But we will only set our launch date when we have information from the Government that it is safe to do so.

“Playing to full arenas would be ideal but there is currently no certainty on when that will be possible and we are exploring all options in close consultation with our clubs.

“The safety of players, coaches, club staff and fans is paramount and we will be adhering to all guidelines to allow them to return safely.

“We do understand that these plans can change and so we’re doing appropriate contingency planning while retaining flexibility, so that we can act quickly and safely when we need to.”