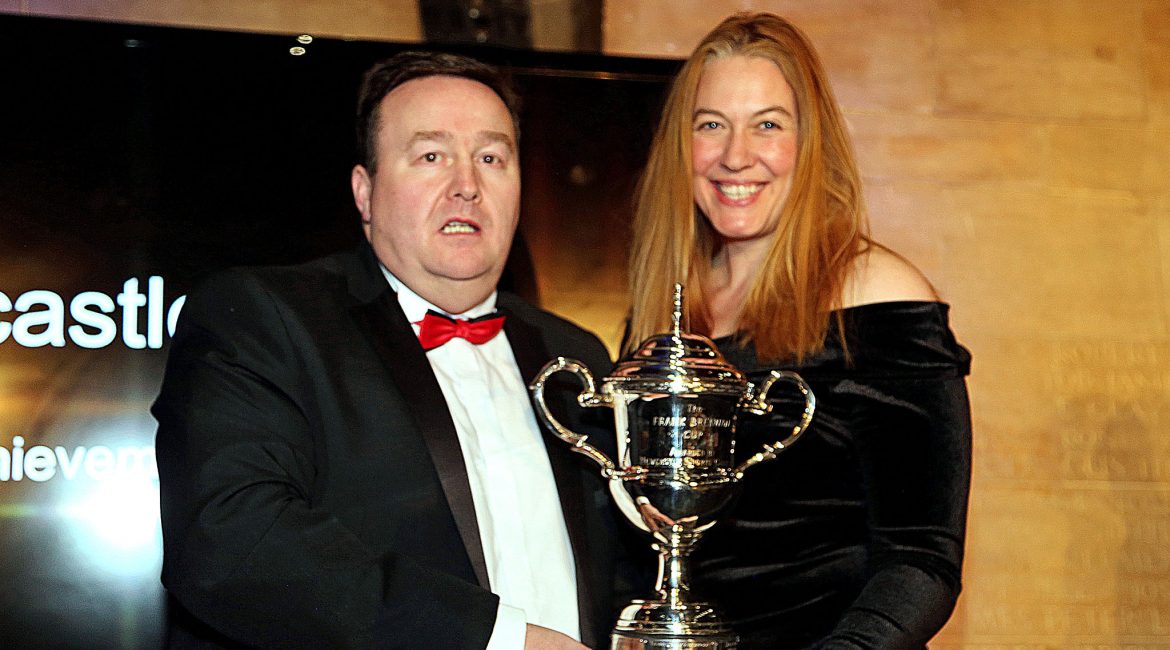 At the 42nd annual Sport Newcastle dinner on Thursday night we were awarded the title of Team/Club of the Year and in particular for the achievement of building and opening our Eagles Community Arena.

The yearly event in the Banqueting Suite of Newcastle’s Civic Centre began as always with fundraising for the charity which supports young aspiring athletes from both the city and the wider region, followed by the presentation of their 2019 Rising Stars awards.

Proudly watched by two tables of Eagles staff and foundation trustees, Tosan Evboumwan, the 17-year-old academy player who has been in many a headline this past year, was one of the Rising Star trophies recipients in acknowledgment for both playing with the club and flying the flag on the international stage.

The club has a history of picking up awards at this event, having previously won the Team/Club of the Year trophy in 2006, 2012 and 2016, but this year instead of being awarded for our achievements on the court it was for quite literally building the court.

ITV Evening News host Ian Payne hosted the presentations of the main awards of the night and introduced us as the Team/Club of the Year recipients by saying “it is going to one of the major influences on Newcastle’s sporting landscape.

“Tonight’s accolade though isn’t about their success on the court, it’s about the court itself. The song the Blaydon Races needs a new verse doesn’t it, because if you’re gannin’ along the Scotswood road at the moment all the smiling faces are in the new Eagles Community Arena.

“It is a monument of dedication and determination that stretches back to 1995 when the sport of basketball crossed the river to arrive back in Newcastle. 25 major trophies might be enough for some clubs, but what these black and whites wanted was always their own home.

He then directed everyone’s attention to the screens ending with “In January that dream became true as the doors opened to a sell-out crowd at the Eagles Community Arena.”

Watch the video shown to the dignitaries and guests at the 42nd Sport Newcastle Annual Dinner on announcing the Team/Club of the Year award for 2019 goes to Newcastle Eagles:

Eagles Community Foundation Chief Executive Officer Sam Blake went up to receive the award saying “We have been working towards this for 12 years. And 12 years later we have a house.

“We’re very much a family at the Eagles. A lot of us have spent our adult lives behind this sport. We’ve worked so hard to get what we’ve got.

“We’re really grateful and I’ve got two tables of amazing people here tonight to say thank you. We’ve had so many people who have made this happen so a massive thank you to everyone.

“In our programme we have 2,000 players now who are playing on a weekly basis. On a Friday night it’s an arena set-up and then on a Saturday it’s all the kids, from 5-years of age all the way through to all the seniors.

“If anyone wants to feel great about sport come to the arena on a Saturday to see all the activity taking place. It will certainly bring a smile to anyone who loves sport and I’m just so proud of it.

“We started off as a very small team, but now we’re army and all on this journey together. It will be really strange when everyone thinks it’s normal that basketball has an arena in this city and our path is forgotten, but that will be the next generation and in the next 12-years who knows where we’ll get to.”