Academy Teams Pile on the Points 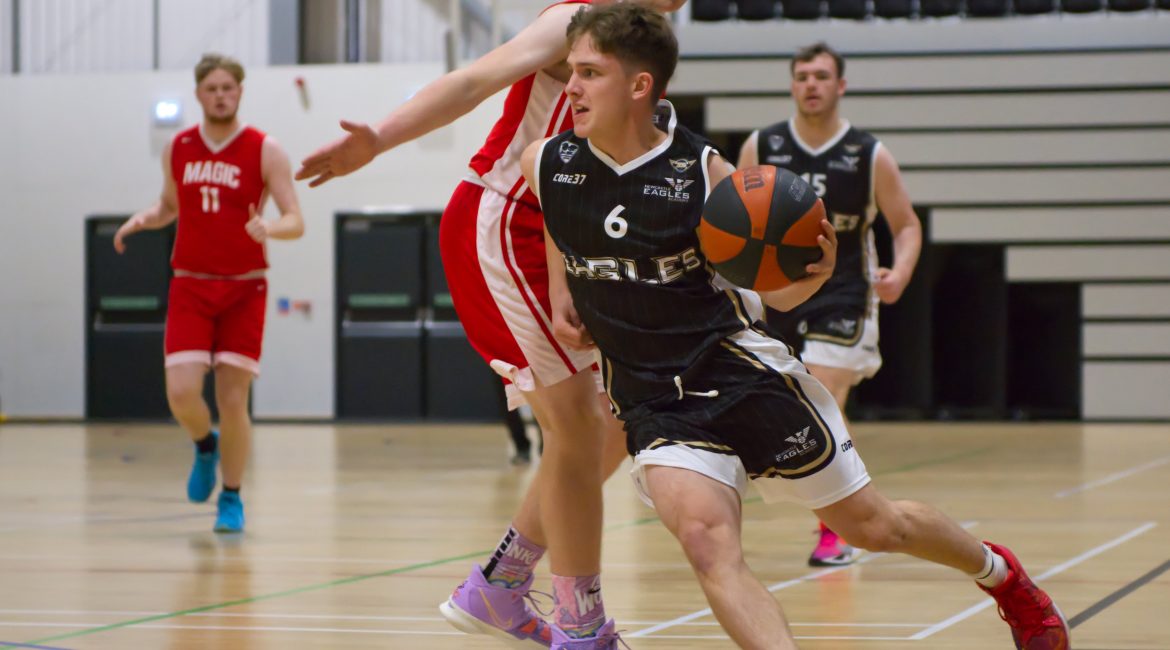 Newcastle Eagles Academy Under 14 Boys celebrated their first homecourt clash of the season in style with a convincing win against City Of Leeds BC Gold.

Chloe Gaynor’s side led from tip to buzzer as they closed in on a famous century of points.

And although the hosts fell just short of the 100-point mark, a fabulous 97-38 victory underlined the potential within a talented team.

Seven of Gaynor’s 12-strong roster put points on the board with key contributions coming thick and fast.

It was Leo Degnen-Potter who converted early on from the first of a series of destructive fast breaks.

The Eagles led 40-17 at the half after taking full advantage of some lax Leeds defence.

But the pace didn’t drop after the break as Gaynor’s in-form players extended their advantage to 65-27 with 10 minutes to play.

A superb defensive show down the stretch held the visitors scoreless in the final period as Newcastle completed a statement win with room to spare.

A game-high 36 points from Sophie Hawkins paced a hugely impressive win for Newcastle Eagles Under 14 Girls at Liverpool.

Ellen Totton’s side made the long trip to Merseyside full of confidence following a fine victory against City Of Leeds the previous weekend.

And despite a slow start the visitors rolled over another of their heavyweight northern rivals to claim an eye-catching 95-32 road win.

Totton said “I’m very impressed with the improvements the girls made within the game. “They had a poor start offensively and played very crowded in the key.

“By the end of the game their spacing was much better and that allowed them to create more open drives.”

The Eagles struggled to create clear shots in the opening minutes of the game and Liverpool established an early lead off the back of Newcastle’s turnovers.

But Grace Rae broke Newcastle’s duck and following a quick timeout Seraphine O’Neill and Hawkins — with an 8-0 tear — put the Tynesiders in control.

The Eagles took the first quarter 26-12 and never looked back despite slipping into second period foul trouble.

Katherine Bird and Lucy Fleming joined the fray and their off-ball movement and cuts to the basket kept the Merseysiders’ defence keen.

With both teams falling foul of the officials, Newcastle managed to open up a 54-17 lead at the half and it was Jessie Dormenyo who took the game to the hosts after the break.

Coach Totton used the last quarter to work on half-court offense, trying to create more off ball movement and space for drives.

Lexie Cardwell shone off the back of some sparkling transition defence and Hawkins was backed up by Rae (18) and O’Neill (16) as Newcastle bagged another brilliant win.

Anyone involved in academy basketball for the last few years knows the championship machine that is Manchester Magic.

They are coached by a former Spanish league professional and international keynote speaker in children’s sports coaching.

But Newcastle Eagles Under 16 Boys met the toughest of challenges head on before slipping to a battling 96-68 loss.

The Magic boast one of the biggest ‘bigs’ in the Under 16 universe and can call on a three-point shooter to shame Steph Curry (six for eight on the day).

They were the pre-COVID national champions and look odds on to retain their crown this season.

But a new-look Newcastle starting five put the cat amongst the pigeons early on with George Stephenson impressing.

And once the Eagles introduced more familiar faces the hosts reduced the deficit to 15 points at the end of an entertaining first quarter — point guard Ollie Finlay completing a brace of and-one plays in quick succession.

The hosts dug in towards the half with Jonny Ajayi’s defence sucking fouls from the Magic.

But Manchester maintained their focus to lead 54-27 at the break.

As the visitors hit foul trouble in the third it was time for Emmanuel Hezekiel to take centre stage and his six points kept the scoreboard ticking over for the hosts.

And gutsy Newcastle finished the game the stronger of the two sides with Farrell Kepngang bagging eight points down the stretch.