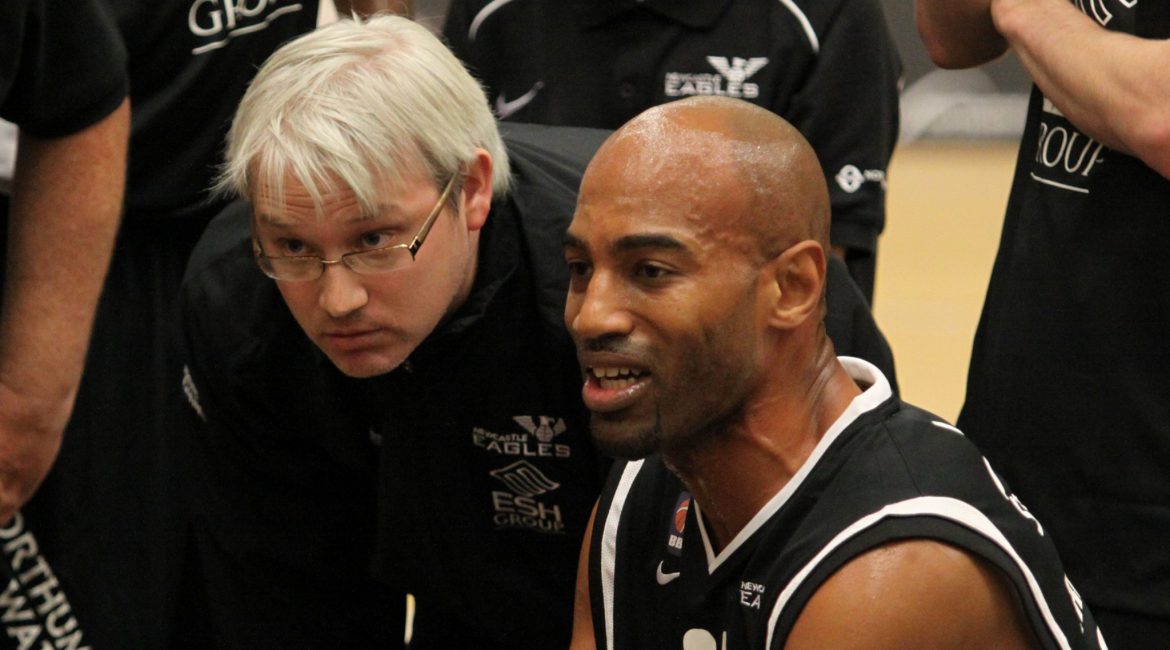 Newcastle Eagles MD Paul Blake has thanked Dave Forrester for a decade of ‘incredible’ service after the club’s assistant coach revealed he was stepping down from BBL duties.

The popular solicitor became a familiar face on courts across the UK as former head coach Fabulous Flournoy’s most trusted lieutenant and right-hand man.

And Forrester and Flournoy shared a decade of unprecedented success before the latter took up his role with NBA champions Toronto Raptors last summer.

“Dave is a key part of the Newcastle Eagles family and someone who I’ve been proud to call a friend and a colleague for many years now,” said Blake.

“He had a fantastic working relationship with Fab and the two of them just clicked at a time when we needed to reinforce our position as the team to beat in the BBL.

“When we appointed Ian MacLeod as interim head coach last year Dave was keen to offer his support and experience and he continued to play a key role behind a team that lifted the BBL Trophy in March.

“There are thousands of fans and hundreds of players who will want to join me in thanking him for making an incredible contribution to the club during the last decade.”

Former Eagles season ticket holder Forrester began working with Flournoy as far back as the 2006/07 campaign following an introduction by Blake.

Their relationship blossomed to such an extent that Forrester was plucked from his courtside seat midway through the 2009/10 season and catapulted into the assistant coach’s role he held until this summer.

“I built up a conversational relationship with Fab for the first couple of years and started scouting players and offering some post-match advice now and again,” explained a familiar face on the Eagles bench.

“When [former assistant] Billy Spragg stepped down I thought that I should probably front up and offer to help on matchdays.

“Of course Fab managed to get himself thrown out of a match four games later and I suddenly found myself in the head coach’s role!

“It was a hell of a ride with so many high points and a few low points too.

“But even the low points didn’t affect us too badly. Fab and I always loved a challenge and we relished the chance to solve the problems.”

Forrester’s fairytale rise from fan in the stand to BBL coach became the stuff of legend as he assisted Flournoy to an unprecedented trophy haul.

But the courtside critic turned key adviser had always intended to step aside when his friend and former colleague called time on his own Eagles career.

“I had decided to leave at the same time as Fab – that was always the plan,” added Forrester.

“But neither of us knew when that would be and ultimately it happened two weeks before the start of last season.

“I’d recruited most of that team and didn’t feel it was fair on Ian if I walked away without any offer of support.

“He was happy to keep me on board but I knew last season would be my final campaign on the Newcastle bench.

“That’s what made lifting the BBL Trophy extra special and it felt like the perfect ending to a pretty remarkable ride.

“Ian is a fantastic young coach and real asset to the organisation and I can’t wait to see where he takes the team this season.”

As a trustee of the Eagles Community Foundation and a committed volunteer, Forrester is not about to walk away from the club he holds closest to his heart.

But stepping away from BBL duties will give the full-time solicitor and married father-of-two more time to focus on family life and other aspects of the sport he loves.

“The big thing that’s changed in the time that I’ve been involved in basketball in the North East is the opening of the Eagles Community Arena,” he added.

“In the past people complained that there wasn’t a dedicated basketball facility in the region and there was nowhere where kids could play.

“We’ve got a fantastic facility here and it’s my mission to fill it with people playing basketball.

“At the same time as supporting the Eagles Academy and the Central Venue League, I want to make basketball a sport for everyone.”